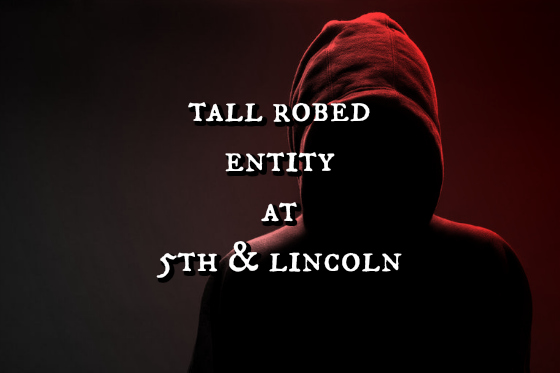 I’m a 28 year old male. I live in Denver, Colorado. At the time, I was a front desk manager for a hotel, so it was fairly common for me to go in early most mornings. By mid November, it tended to get pretty cold, especially right before dawn. Usually, I took a city bus to work, but on this particular day, I wasn’t feeling the long commute and decided to just call an Uber. There wasn’t anything especially out of the ordinary that morning to speak of that I remember, apart from the city being eerily silent.

My driver arrived on time (around 4:30 am) and I got in. In most cases carpool drivers usually say, “Hello” or something to that effect, but when I met this one, there was no greeting. My driver was female, around my age (late 20’s), and noticeably very pale.

No answer. The car matched the description on my app, so I just shrugged it off and got in anyways. My driver was probably just introverted, no big deal. Even though it was early, it seemed strange to me how we were the only ones on the road that morning. I recall not seeing another car the entire 15 minute ride to work.

Most of the trip was quiet. Initially, neither of us had said anything to one another. About 10 minutes into the car ride, I began to feel the presence of an awful vibe within the car. I was worried I might be contributing; so to break the tension, I asked,

“I’ll bet you’re tired, huh? Or are you just starting your shift this early.”

Still no answer from Lisa; her gaze locked dead ahead. Something was definitely off.

Finally a little color seemed to return to her face, awoken from her daze, she stammered,

“Huh? What? Yes, I’m sorry. I’ve… I’ve just started. Actually, you were only my second ride this morning, but after I drop you off… I think I’m going to quit.”

This really sparked my curiosity, because surely something must have happened. Was it me? Was it something I shouldn’t poke my nose into? Regardless, I pressed her more.

Upon asking this, Lisa’s face returned to her previous pale self.

“You wouldn’t believe me.” she said in a soft tone under her breath.

“Listen, I honestly don’t even know you, so what difference does it make if I do or don’t?” I asked.

Lisa pulled up to a stop sign and our car sat idling.

“I saw something.” She turned her face to me.

“I don’t know what it was. I don’t take drugs. I don’t even believe in this stuff. Why me. What could it have even been?”

It was clear whatever it was traumatized her pretty good.

Lisa’s voice was soft and shaken.

“Yes, I’m okay. I… I don’t know what it was. I’ve never in my life seen a man so tall.” she sighed forcefully.

“I had just dropped off my first rider and was on my way to pick you up. I pulled up to the stop sign on 5th & Lincoln. I remember exactly where I was because I was parked over the crosswalk. That’s when I saw it. It was 8 feet tall and wearing a robe, standing on the edge of the crosswalk. It was larger than any man could be. When I caught sight of it; I don’t know what happened. My body was frozen in a state of total fear. I wanted to shout; I wanted it to go away. I had never been so afraid; I thought I might pass out. I was totally frozen. The robed figure then began crossing the street, passing through the front of my car. HE WENT THROUGH MY CAR! When he did, all my radio’s volume went up to maximum, and I was consumed with… evil?” she paused

“When the thing had passed all the way through the hood of the vehicle, the radio volume returned back to normal. When I could move my body, I drove as fast as I could get out of there. I’m not saying what I saw was a ghost, I don’t even believe in them; I never have… but it… I don’t know what it was.”

With this, Lisa’s eyebrows drooped, and her voice fell silent once again; she had revealed far too much personal information to a total stranger in an Uber. I understood.

It’s been about 8 months since this happened. At the time it was only 4 blocks from my house, so I would often wake myself up before dawn to survey 5th & Lincoln. It’s a forgettable block with a small building and an abandoned fenced-in yard. I know very very little of Denver’s history, and I myself have yet to see anything out of the ordinary at this particular spot. I have since moved from this location, but every time I drive by this area, I can’t help but think of Lisa’s story. KV

Mysterious Creatures (Mysteries of the Unknown)

A Field Guide to Demons, Vampires, Fallen Angels and Other Subversive Spirits

Create a Servitor: Harness the Power of Thought Forms

Creatures of Thought: The Creation of Living Thought-Forms And The Mastery of Your Reality

10 Times Ed And Lorraine Warren Were Outed As Frauds