I know EXACTLY where MH370 is and I can’t understand why nobody is looking there, former pilot claims

AN ex-pilot with over 50 years in the cockpit says he would bet his house that he knows where the wreckage of MH370 is and that search teams are all way off the mark.

Veteran pilot Byron Bailey has been saying for years investigators have been searching in the wrong place and they should be looking just 20 miles south of the search site instead. 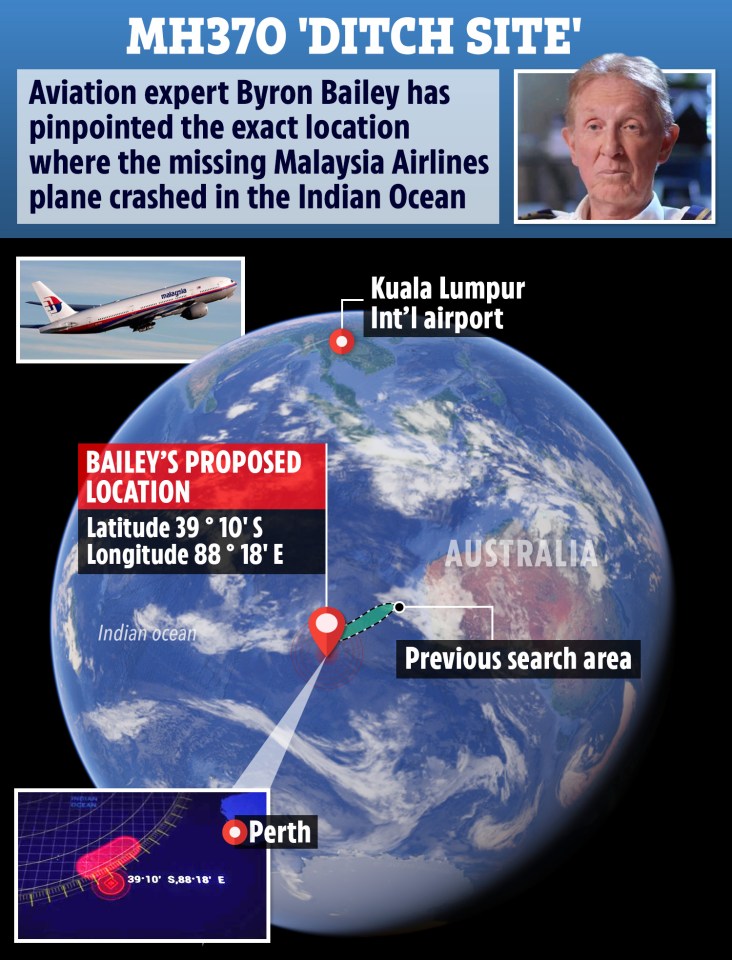 Capt. Bailey, who was a senior Emirates pilot for 15 years, has not pulled punches and has described the location precisely. He said it’s latitude 39 ° 10′ S and longitude 88 ° 18′ E.

He said: “If I’m wrong then it probably means the aircraft has been taken by aliens or is sitting in a hangar somewhere in Kazakhstan.

“I’m so sure. I’d bet my house on it. As far as I’m concerned it’s game over, we know where it is, we’ve always known where it is.”

The official Australian Transport Safety Bureau (ATSB) search was based on the assumption the plane ended as a ghost flight, or a death dive, meaning that the pilot was dead when the aircraft ran out of fuel at 40,000 feet.

The final end-of-flight scenario is crucial to establishing the possible location of the MH370 wreckage.

Malaysia Airlines Flight MH370 took off from Kuala Lumpur and was heading to Beijing with 239 people on board.

Passengers included Chinese calligraphers, a couple on their way home to their young sons after a long-delayed honeymoon and a construction worker who hadn’t been home in a year.

Before that, Malaysian authorities believe the last words heard from the plane, from either the pilot or co-pilot, was “Good night Malaysian three seven zero”.

Satellite “pings” from the aircraft suggest it continued flying for around seven hours when the fuel would have run out.

Experts have calculated the most likely crash site around 1,000 miles west of Perth, Australia.

But a huge search of the seabed failed to find any wreckage – and there are a number of alternative theories as to its fate.

Capt. Bailey told Sky News that there could not have been a death dive and believes Captain Zaharie Shah glided the plane as far as possible and landed it on the water outside the search zone.

“All the evidence points to the fact it was ditched,” he said. “I’m sure the captain was trying to ditch the aircraft in as far south, remote location as possible, and leave as little wreckage as possible that would sink.”

Then-PM Tony Abbott yesterday confirmed the theory that the disappearance was a murder-suicide by pilot Capt. Zaharie Amhad Shah, when he was implicitly told by Malaysian authorities soon after the crash.

Capt. Bailey said that the failure to voice this concern by the Malaysians had wasted $200 million in search efforts.

Abbott said: “Let’s assume that it was a murder-suicide by the pilot and if there is any part of the ocean that could have been reached on that basis let’s get out and explore it.”

Originally the ATSB had concluded that the small piece of debris found indicated a high-speed impact with water that was not consistent with a controlled ditching.

However search teams have since managed to eliminate most of the area associated with the death dive scenario.

Martin Dolan, former head of the ATSB said: “The most likely location is [still] in or around the area that we have been searching.

“That means there’s an increasing likelihood there was someone at the controls at the end of the flight.”

Former pilot Mike Keane also said the ATSB should be looking further south, about 150km from where the search was.

Former transport minister and deputy prime minister Warren Truss said Australia was looking in the wrong place but added that they had already increased the search area on a number of occasions and had to draw a line somewhere.

Mr Truss still insists that there was no one alive on the plane in its last few hours.

What are some of the other theories about the Malaysia Airlines flight?

Some feared Russian president Vladimir Putin was involved in the hijacking of MH370.

US Science writer Jeff Wise claimed Putin “spoofed” the plane’s navigation data so it could fly unnoticed into Baikonur Cosmodrome so he could “hurt the West”.

French ex-airline director Marc Dugain accused the US military of shooting down the plane because they feared it had been hijacked.
A book called Flight MH370 – The Mystery also suggested that it had been shot down accidentally by US-Thai joint jet fighters during a military exercise and covered it up.

Malaysia police chief Tan Sri Khalid Abu Bakar suggested the disappearance could have been the result of a suicide.

He claimed someone on board could have taken out a large life insurance package before getting on the plane, so they could treat their family or pay back the money they owed.

Historian and writer Norman Davies suggested MH370 could have been remotely hacked and flown to a secret location as a result of sensitive material being carried aboard the jet.

Cracks in the plane

Malaysia Airlines found a 15-inch crack in the fuselage of one of its planes, days before MH370 disappeared.

The Federal Aviation Administration insists it issued a final warning two days before the disappearance.

But the Daily Mirror claimed the missing jet “did not have the same antenna as the rest of the Boeing 777s” so it did not receive the warning.

He claimed the pilot wanted to “create the world’s greatest mystery”.

Another theory claimed that he hijacked his own plane in protest of the jailing of then-Malaysian opposition leader Anwar Ibrahim, and as a way to destabilise the corrupt government of Najib Razak.

Another seemingly far-fetched idea said the pilot had deliberately crashed the plane to cover his track as he had parachuted out of the plane so he could spend the rest of his life with his girlfriend who was waiting in a boat in the sea.

In the wake of the incident, South Korea noted that North Korea nearly took out a Chinese plane which had 220 passengers on board, on March 5, 2014.

Some fear Pyongyang shot the plane down, but others believe it was hijacked and diverted into the communist nation.

One theory claims that because many relatives were able to hear a ringing tone for up to four days after the crash so the doomed jet could not have smashed into the Indian Ocean.

Nineteen families have all claimed the devices of their loved ones rang for up to four days after the jet went missing.

However, wireless analysts claim that phone firms sometimes use a phantom ringing sound when the device is not active, the Daily Star reports.

Crashed in the Cambodian jungle

Despite millions being spent on the search to located the wreckage, the Brit sleuth believes he has found the jet in a mountainous area of the Cambodian jungle.

In response, the Chinese government used observation company Space View to focus in on the high-altitude area on the outskirts of Phnom Penh.

However, the firm claim there was no sign of any plane, least of all the Malaysian Airlines aircraft which has been missing since March 2014.

An MH370 sleuth has claimed that locals in Cambodia told him they saw a plane believed to be the doomed Malaysia Airlines flight crashing in the jungle.

The plane was heading for Kazakhstan

If the jet was flying north then possible locations could stretch as fast as the border between Kazakhstan and Turkmenistan to Thailand.

The Malaysian Prime Minister Najib Razak originally asked the Kazakhstan leader Nursultan Nazarbayev to set up a search operation in the country but this quickly got sidelined as the rescue efforts focused on the Indian Ocean.