A PHOTO of a creature swimming in Loch Ness has sparked fresh debate on whether a monster roams its waters.

Some people think the image shows a catfish that has jumped into the loch but others say the snap is fake.

This is the image that’s causing so much debate[/caption]

A man called Steve Challice, from Southampton, said he took the photo while on holiday in Scotland.

Last September, he claims to have been at Castle Urquhart on the West bank of Loch Ness when he saw the ripple in the water.

However he’s not claiming to have witnessed the Loch Ness Monster.

He said: ““In my opinion (and I’m no expert) I think it’s a large fish that got into the Loch from the sea.

Some people think it shows a large catfish[/caption]

“As to what it is personally, I think it’s a cat fish or something like that but a big one.

“Someone suggested it may be a sturgeon. It’s very large as the bit you can see must be at least 8-foot-long and who can tell what amount is below the surface.

“The water is very dark in Loch Ness so it’s hard to tell.

“I saw a disturbance in the water in front of me and took an image, then a second one and suddenly this fish came out of the water and I got an image of it.

“It was gone almost instantly so much so I wasn’t sure if I had got it or not.

“I guess it was something of a fluke shot. I waited about for a bit and took another image but didn’t see the fish again.”

Imagine having this 286lb monster on the end of your line! This incredible catfish was landed by Benjamin Gründer after a lengthy fight. #Monster #Catfish #Angling #Fishing pic.twitter.com/pjPCsAbc6X

Can't believe we gotta say this, but the loch ness monster picture is fake. Compare these unique patterns here pic.twitter.com/shG5dVAXGr

Unfortunately for Steve, people are now suggesting that the image is fake because the creature shown resembles a completely different cat fish image.

Catfish have pigmentation patterns on there back which are said to be as unique as fingerprints.

This has led Twitter users to speculate the creature in the Loch Ness image is actually a catfish that was caught in Italy in 2018.

The creature left a visible trail in the water[/caption]

A previous study of Loch Ness also found no traces of catfish DNA.

However, Steve has reportedly reiterated that the images have not been photoshopped and that he’s not claiming they show Nessie the monster.

Last year, scientists claimed that the infamous Loch Ness monster may be a giant eel.

In a fresh twist in the decades-long tale, a bonkers Kiwi scientist claims to have evidence suggesting Nessie really does exist.

He and an international team of scientists went searching for reptile DNA in the famous 226-metre deep lake in Scotland in 2018.

Around 250 water samples were taken and analysed for signs of the reptilian beast.

Professor Gemmell, a DNA scientist at New Zealand’s University of Otago, unveiled the results at a press conference on the shores of Loch Ness on Thursday morning.

“We found large amounts of eel DNA in the Loch Ness,” he explained at a press conference.

“Every single site we went to had eels. The sheer volume was a bit of a surprise.

“Is it possible there’s a giant eel? Maybe. We don’t know if the DNA is gigantic or just many small eels.

“There may well be a monster in Loch Ness. We don’t know – we didn’t find it. So that’s the hunt. The hunt is done.” 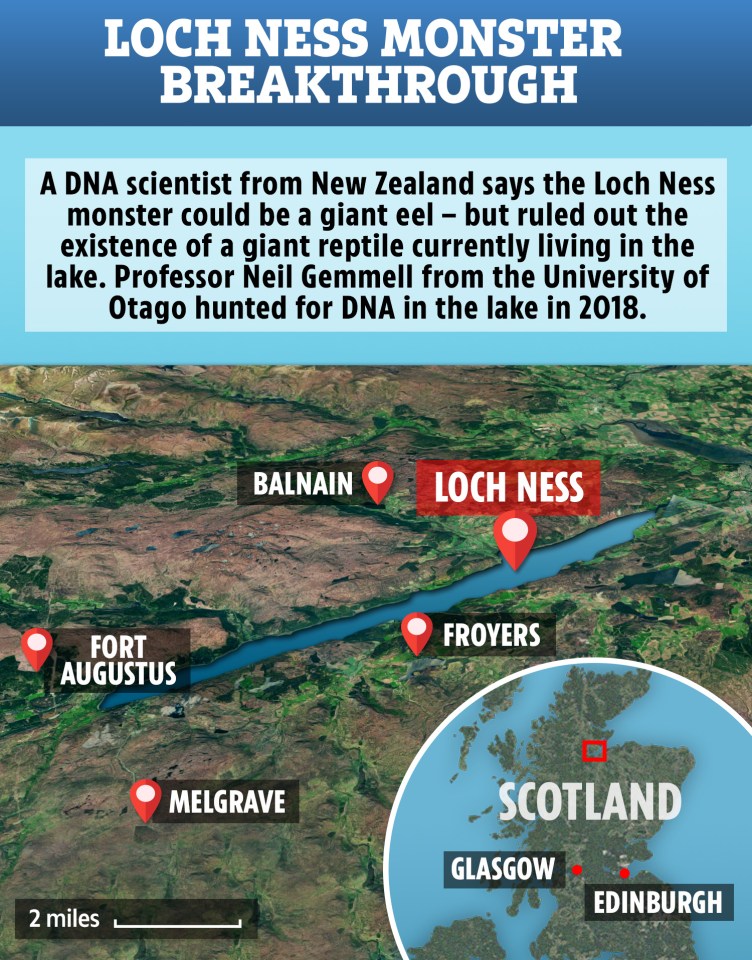 “Sighting” of Nessie in May 2001. This photo was also later proved a fake[/caption]

Despite numerous “sightings” over the years, there’s still no proof Nessie is real.

And Professor Gemmell’s study confirmed that there was no evidence of a giant reptile in Loch Ness.

“Is there a plesiosaur in Loch Ness? No. There is absolutely no evidence of reptilian sequences in our samples,” he explained.

Nessie was first “spotted” back in 565 – a biography of Irish monk Saint Columba mentions a giant “water beast” dragging a man to his death in Scotland’s River Ness.

However, wider interest in the monster was not sparked until 1933 after a road was built along the loch, making it far less isolated.

The Loch Ness monster – known affectionately as Nessie – is often described as being a large animal with a long neck and usually with a hump popping out of the water.

Although the first sighting is said to have occurred in 565AD it was only in 1933 that widespread public opinion was sparked.

While scientists dismiss claims that there is some sort of prehistoric monster swimming about in the Scottish Highlands others are convinced of its existence.

Either way the story of Nessie is now firmly part of Scottish folklore.

The first reported sighting of a monster is said to have been by the Irish monk St Columba in 565AD. Columba sent a man across the River Ness after stories of a “water beast” had circulated. It’s said that while the man was swimming he was approached by a beast but Columba made the sign of the cross and told the animal to “go no further”.

Modern day interest in the beast was largely sparked by a sighting in July 1933 by George Spicer and his wife when they claimed “a most extraordinary form of animal” crossed the road in front of their car.

Perhaps the best-known picture of Nessie is the ‘Surgeon’s photograph’ which was published in April 1934, supposedly showing the animals head and long neck. According to the photographer Robert Kenneth Wilson, he managed to capture the image while he was looking at the lake. The image though was exposed as a huge hoax in the 1999 book, Nessie – the Surgeon’s Photograph Exposed.

Lab technician Gordon Holmes claimed he had managed to film the monster in 2007 which he described as “this jet black thing, about 14 metres (46 ft) long, moving fairly fast in the water.” Both BBC Scotland and STV aired the footage at the time which marine biologist Adrian Shine described as among “the best footage [he had] ever seen.”

In other news, fossilised footprints found in South Korea have been attributed to an ancient 13 foot crocodile that walked on two legs.

A huge tooth found South Carolina once belonged to an ancient megalodon shark.

And, a skeleton of a 300,000-year-old elephant with giant tusks has been unearthed in Germany.

What do you think of this ‘Loch ness monster’ photo? Let us know in the comments…

Taboo! is a Live podcast/vidcast that covers all manners of topics from Aliens to Politics and everything in between! ​ ​Join us every Monday at 7pm MST for our live broadcast. ​Join in the fun by calling in 970-999-5176, or messaging us in the chat rooms or Skype to TheArrowRadio. ​Taboo was founded by its host, Zanidu, and his trusty cohort Alex, both of whom felt the main stream media have continually avoided the important topics and brainwashed the masses. ​They decided it was time to give the people a chance to open their eyes by providing a webcast that will provoke deep thought in those who listen, and/or watch the episodes provided here at Taboo. ​Taboo is recorded live weekly and is streamed across many platforms to ensure those who want to watch can do so, as well as interact with the hosts to share their own thoughts on the matters at hand. ​ ​Taboo is incredibly thankful to all of its listeners and hopes to grow that base exponentially as time progresses. ​ ​We stream on: ​Dlive: https://dlive.tv/Taboo.Media ​Twitch: https://taboo.media/twitch ​YouTube: https://taboo.media/youtube ​FaceBook: https://taboo.media/facebook ​Mixer: https://taboo.media/mixer ​SmashCast: https://taboo.media/smashcast ​ ​Follow us on Twitter: https://taboo.media/twitter ​Follow us on LinkedIn: https://taboo.media/linkedin ​ ​Support the stream :https://streamlabs.com/taboomedia/v2/tip (You can buy items there too!) ​Website: https://taboo.media ​Email: show@taboo.media ​Skype: thearrowradio Call-in: 970-999-5176 Discord: https://Taboo.Media/discord Patreon : https://patreon.com/taboo_media p.s. - We follow everyone who follows us, and we purge people who aren't following weekly... Thanks for askin! p.p.s. - We open the chests on Monday's During our live stream (Time Varies, to keep people here!). Be sure to be here when we do!