A FILM showing a Wuhan based virus expert catching bats has fuelled a conspiracy theory that the disease was man-made and leaked from a lab.

The seven-minute film features the centre’s researcher Tian Junhua, who has visited dozens of caves in Hubei province to capture the flying mammals and take samples.

Called “Youth in the Wild — Invisible Defender”,  the short documentary has reawakened a wild conspiracy theory about the Covid-19 originating at the Wuhan Centre for Disease Control (CDC).

Mr Tian works at the centre, which is not far from the animal market where officially the virus began.

Labs here were known to have studied bats and Mr Tian himself was said to have gathered samples from numerous flying mammals.

One anonymous US State Department official told the Washington Times the reports about Mr Tian and his role in working with bat viruses were concerning.

They said: “He lives and works at Wuhan’s CDC, a few hundred yards away from the Huanan wet market.

“He is among the small team in Wuhan that has contributed to China’s obsession in recent years with virus hunting and research.”

‘THE MORE RESEARCH ON BATS, THE BETTER’

In the seven minute video, posted online in December, shortly before the Covid-19 outbreak began, shows Mr Tian inside caves in Hubei province.

The scientist can be seen taking samples from captured bats and storing them in vials.

He says: “I am not a doctor, but I work to cure and save people.

“I am not a soldier, but I work to safeguard an invisible national defence line.”

In a May 2017 report by the Wuhan Evening News, Mr Tian, who has visited dozens of caves, said: “Bats have a large number of unknown viruses on their bodies.

“The more thorough our research on bats is, the better it will be for human health.”

As previously reported, Mr Tian once failed to wear protective gear in a cave and as a result came into contact with bat urine.

And to avoid contracting a disease, he reportedly self-quarantined for 14 days — the same recommended period for people exposed to the new COVID-19 strain.

Biosecurity researcher Richard Ebright, a professor at the Waksman Institute of Microbiology, said the coronavirus behind the pandemic was 96.2 per cent similar to a bat virus discovered by the Wuhan Institute of Virology in 2013 and studied at the Wuhan Centre for Disease Control (CDC).

He told the newspaper: “Bat coronaviruses are collected and studied by laboratories in multiple parts of China — including Wuhan Municipal CDC and Wuhan Institute of Virology.

“Therefore, the first human infection also could have occurred as a laboratory accident.” 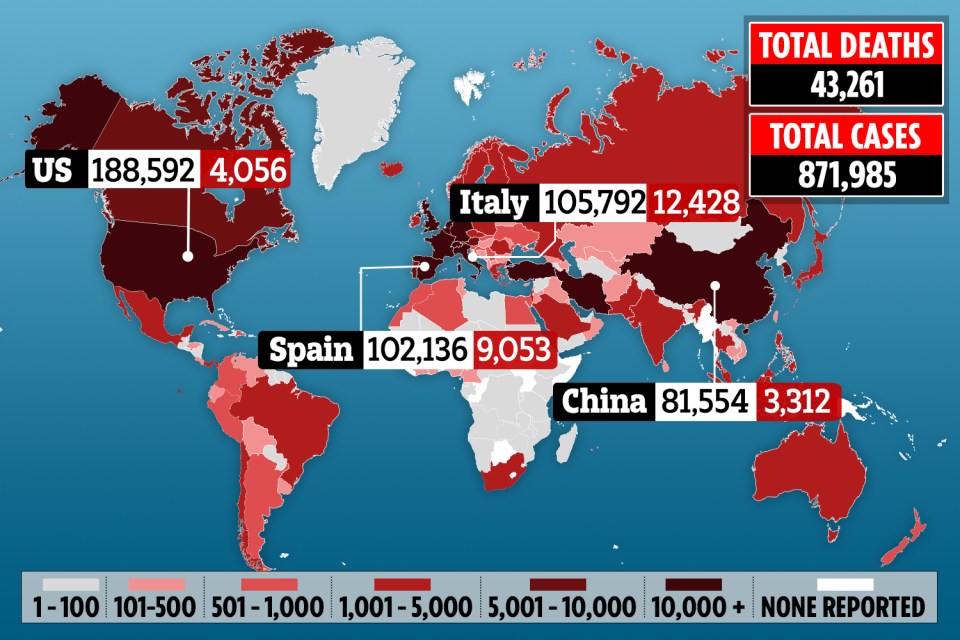 The Washington Times has been unable to reach Mr Tian for a comment and the Chinese Embassy in Washington did not reply to their emails.

The Sun Online also contacted the Embassy in London for a comment.

But without Mr Tian’s side of the story — and any hard proof he was connected — the claims of a lab leak and subsequent cover-up are pure speculation and lay in the realm of conspiracy theories.

“Times of crisis are times of anxiety and it is easier to explain the appearance of an aberration like SARS-CoV-2 as the result of an act of deliberation or incompetence of a laboratory than it is to admit to the fact that nature and evolution.”

Coronavirus has now infected at least close to a million people worldwide and killed 46,000 since the outbreak began in December.

But Covid-19 conspiracy theories are spreading just as fast

Some online crackpots have claimed the virus is the work of the US military, while other wacky webizens allege the outbreak is a “hoax” designed to stop Brexit.

Others allege the disease is a plot by US spies to tank China’s economy.

China’s state-run Global Times has reported that Chinese internet users and experts are calling for more information on whether The Fort Detrick laboratory was linked to the disease.

It cited coincidental events between the outbreak and the closure of the CIA lab.

When Each Zodiac Sign Is Going To Get Married