A SHOCKING sixty per cent of all posts and messages on Twitter that spread misinformation on coronavirus, or calling for an end to the lockdown are automated fake accounts.

They now estimate that 45 to 60 per cent of accounts on Twitter promoting misinformation related to COVID-19 were fake accounts, AKA bots.

Bots were first shown to become a huge problem during the 2016 US election and the Brexit vote, and were one of the ways that Russia was found to have interfered in the build-up to the polls during the Mueller investigation.

Bot accounts can be identified by specific traits – they normally tweet and retweet several posts in a short time period and will copy and paste text from other tweets.

The study found a greater number of sophisticated groups that hire firms to run bot accounts as well as a rise in bots that are now being programmed by hobbyists with too much time on their hands due to the pandemic.

Professor in Carnegie Mellon’s School of Computer Science, Kathleen Carley, said: “We’re seeing up to two times as much bot activity as we’d predicted based on previous natural disasters, crises and elections.

“Because it’s global, it’s being used by various countries and interest groups as an opportunity to meet political agendas.”

Prof. Carley said that one of those agendas is to sow dissension by escalating the online debate over lifting lockdown restrictions through an organized effort to flood social media with demands to reopen the economy.

Carley said that researchers found at least 34 per cent of the tweets that fuel talk of reopening are bots.

When factoring in real-life human accounts that have bot assistants, the percentage of ‘reopen’ tweets is 66 per cent.

“When we see a whole bunch of tweets at the same time or back to back, it’s like they’re timed,” Carley said.

“We also look for use of the same exact hashtag, or messaging that appears to be copied and pasted from one bot to the next.”

The Carnegie Mellon researchers found more than 100 false narratives and conspiracy theories related to COVID-19 that they say were promoted by bots.

They found claims that 5G wireless technology was responsible for spreading the virus and that Bill Gates engineered the COVID-19 pandemic so that he can develop a vaccine that will enable him to insert a microchip into every human to track their movements.

Another study found that around 50 per cent of Fox News viewers believe the microchip conspiracy.

Another theory making the rounds online is that hospitals are using mannequins to fill up their emergency rooms rather than real human beings.

Carley said that these crackpot theories are causing a huge problem for public health by increasing polarization in groups and discrediting factual information and experts.

Carley said: “It’s what many misinformation campaigns aim to do.

“People have real concerns about health and the economy, and people are preying on that to create divides.”

This in turn promotes extreme behavior and less rational thinking that results in a massive threat to public health and increased racism and violence across the world.

Carley said: “Increased polarization will have a variety of real-world consequences, and play out in things like voting behavior and hostility towards ethnic groups.

“We do know that it looks like it’s a propaganda machine, and it definitely matches the Russian and Chinese playbooks, but it would take a tremendous amount of resources to substantiate that.”

Maxwell may kill herself or 'be silenced' warns Epstein victims' lawyer

Thousands of sex robots that can learn and talk to go on sale for £12,000

Twitter says that it has been removing false information related to COVID-19 from its platform.

“We’re prioritizing the removal of COVID-19 content when it has a call to action that could potentially cause harm.

“As we’ve said previously, we will not take enforcement action on every Tweet that contains incomplete or disputed information about COVID-19.” a statement said. 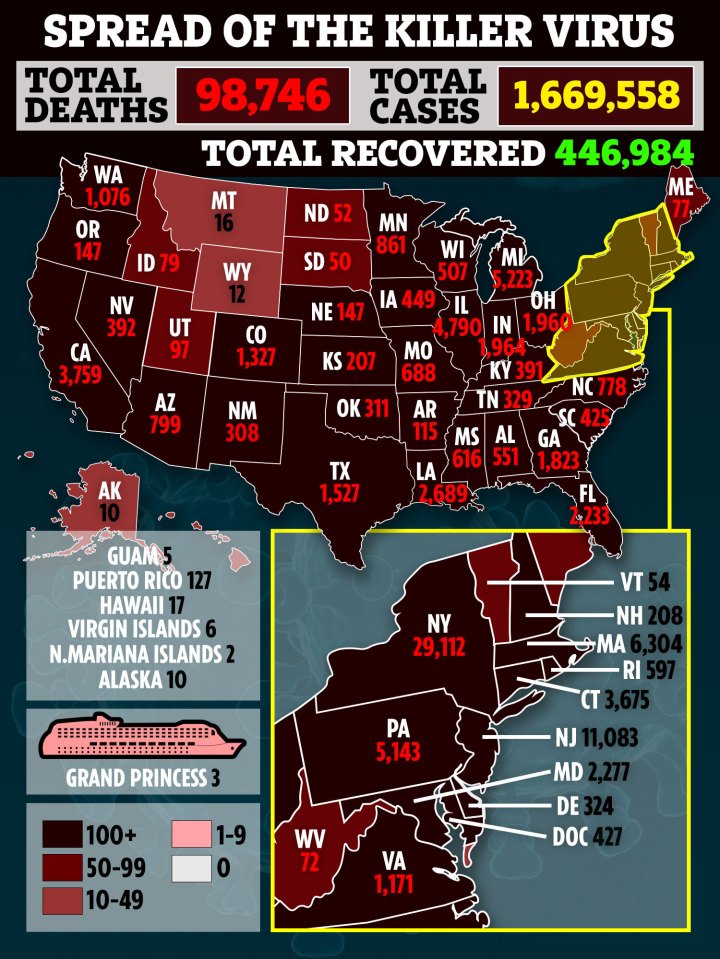 Do you have a story for The US Sun team?